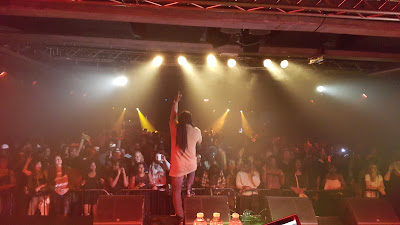 dancehall star, I-Octane, is enjoying every second of his European tour, as he keeps his fans happy both on and off the stage, while keeping in touch with life in Jamaica.

The Digicel/Busta brand ambassador, who has been roaming courtesy of the “bigger, better network”, has officially been on tour since Friday October 9, when he kick-started the schedule with a trio of sold-out concerts that weekend. He performed for a throng of enthusiastic fans in Paris, France, on Friday, then went across the border to Mannheim in Germany on Saturday and returned to France on Sunday for a performance at Le Satynis in Toulon, leaving a trail of intense satisfaction and solid promises to return next year.

“It’s just more life,” an ecstatic I-Octane declared after his mega successful first weekend. “When I came to Europe in 2014, it was for the big festivals, now I am headlining concerts which give me a great opportunity to get up close with my fans. Even when we don’t speak the same language I can feel the love … and the energy is just awesome. I had a dream of this happening in Europe and it’s a great feeling when dreams really come true,” the I L.O.V.E. Y.O.U. singer said.

With 12 of the 19 shows already ticked off his hectic itinerary, the artiste is nowhere near ready to wind down. A string of shows saw him performing in a different German city each night between October 13 and 17. He had concerts in Osnanbruck, Nuremburg, Berlin – the German capital – and Hamburg, after which he travelled to Austria, Spain, Belgium and Switzerland, where he treated fans to awesome performances. An upbeat I-Octane, who noted in one Facebook post that “Pam big son out in the world doing big things”, says his stamina seems to be increasing, even as the European massives get more demanding. 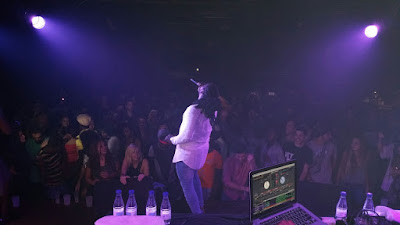 “Europe is not a place where you can give a 45-minute performance. Once you mention an European performance, you are talking about nothing less than two hours. So you know that we have to keep up the exercise regimen, eat right, get lots of rest and stay focused. The road is grueling, but the enjoyment of entertaining my people and the appreciation from fans can make an eight-hour journey from one country to another feel like half an hour,” said the artiste, whose Prison Life video recently had it premier to rave reviews.

He noted that one of the greatest joys on the road was meeting up and performing alongside other Jamaican artistes.

“Sasco and I did a show in Austria on Sunday and it was siiiiick,” he said of the much-talked-about concert entitled ‘Champions In Action’ held at the Reigen in Vienna.

After a few days break,, I-Octane resumes touring on October 29 at the Deluxe Club in Munich, Germany. The curtains close on the tour on November 8 at Club Empire in Rotterdam, Netherlands.

Posted by Dancehallreggaeweseh.com at 12:37 PM 6 comments:

Posted by Dancehallreggaeweseh.com at 10:56 AM 4 comments:

Posted by Dancehallreggaeweseh.com at 4:27 PM 5 comments:

Posted by Dancehallreggaeweseh.com at 2:44 PM 4 comments:

Posted by Dancehallreggaeweseh.com at 5:56 PM 4 comments:

Industry experts and fans alike are describing Denyque as “hard not to love,” and the

dreamy island songstress has been putting her sultry vocals and melodic flows to work with the aim of making the world fall in love with both her and her music. Though there has been a resurgence of reggae in Jamaica, Denyque’s vocal style and range goes against the grain and lends itself to pop and r&b tracks, creating a sound like none other in the home of dancehall and reggae. After releasing successful singles such as “Summer Love”, “How To Rave” and “Make Me Believe You”, all of which hit top ten charts in more than 10 countries, Denyque is now focused on putting together a compilation that will appeal to an international market.

The pasionate performer got her foot in the proverbial door in 2009 when she recorded her first single "Can't Breathe".  Since then, Denyque has grown tremendously and has firmly stepped into the entertainment stratosphere, picking up one of Jamaica's most prestigious accolades - the Excellence in Music (EME) award for Best New Artiste 2010 and The Manchester People’s Choice Award in 2014. It doesn’t stop there, the singer has also been nominated four times in the category “Young Hot and Hype Female of the Year” for the annual Youth View Awards 2011, 2012 and 2013 (the teenage award show in Kingston, Jamaica), and in 2015 nominated in three outstanding categories, “Young Hot and Hype Female of the Year, Female Fashion Icon of the Year and Favourite Local Female Artiste of the Year”.

She experienced grand stages such as Reggae Sumfest, where she shared the stage with Hip Hop Artist Nicki Minaj and made her debut on the African continent which saw her performing for more than 4000 fans in Kenya. Denyque is no newbie to putting on a show.

In 2014 she was selected to be a guest judge on Jamaica’s TV talent show Rising Stars and also capped the job for the Jamaica’s Premier League Football (soccer) Competition as their live TV host. Already listed as one of Complex Magazine's "Top 25 Sexiest International Singers”, Denyque has not only been honing her sound, but also her image. This confident risk-taker has always taken an experimental approach to her image and is not afraid to reinvent her look to channle her current style.

Denyque’s most recent single “Ring the Alarm” produced by multi-platinum artist Sean Paul is promising big things for 2015 and beyond, where the official video and upcoming EP will set the tone for an indelible future.

Posted by Dancehallreggaeweseh.com at 5:36 PM 4 comments:

Email ThisBlogThis!Share to TwitterShare to FacebookShare to Pinterest
Labels: DENYQUE 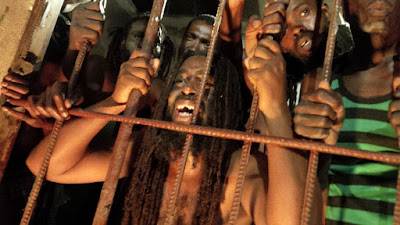 Kingston, JAMAICA:- Right on the heels of shooting the video for his much-hailed social commentary piece, Prison Life, singer I-Octane quietly observed as the island has been plunged into a heated debate surrounding the questionable gift of a prison for Jamaica from former slave masters, Britain.

Whereas the award-winning reggae/dancehall artiste preaches earnestly about the ills of prison life in his song and begs his listeners to stay away from all activities which could possible land them in jail, here comes Britain’s Prime Minister, David Cameron with money to build another jail to fill up with offenders.

Cameron has been accused of insulting Jamaicans during his visit to the island by ignoring calls for discussion on the issue of reparations and announcing the controversial deal that will see the UK helping to construct a state-of-the-art prison in Jamaica to house Jamaica-born convicts created by the British system.

“Right now, we don’t need more prisons, we need jobs. We need more funds that we can spend on educating our youth and ensuring that school-leavers can be productive and can contribute meaningfully to society,” a thoughtful I-Octane opined.

He added, “Jamaica needs serious rehabilitation efforts for the persons who are now in prison so that once they regain their freedom they won’t become repeat offenders and can also help to keep their friends on the straight and narrow. This song, Prison Life, has opened up to me a whole new level of understanding. So many persons have reached out to me to share their personal stories of being behind bars and their feelings of horror, despair and loneliness … I could write a book,” the usually jovial entertainer said seriously.

Prison Life is  the first song from the DJ Frass-produced EP, New Chapter. Released less than four weeks ago, the single has catapulted its way into mainstream and has connected with the psyche of the people. The video, which is quite a creative piece which truly reflects the imagery of the song, is scheduled to have its highly anticipated premiere this week.

“The video shoot was real…almost too real. Respect to Bling Blang and the crew for a job very well done. This is not about getting ‘likes’, this song/video is a gift which I hope will help even one person to stay away from prison,” the Never Sell Out singer stated.

Posted by Dancehallreggaeweseh.com at 1:16 PM 5 comments: 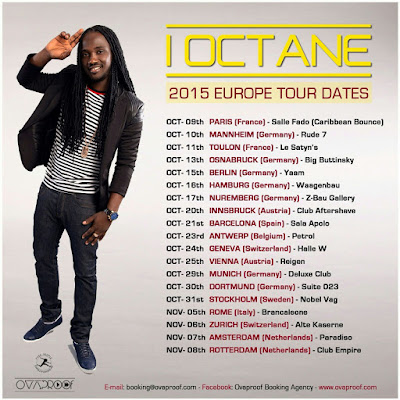 Europe with a performance at the Salle Fado in Paris, France.

The string of gigs on that continent will see him making 19 stops across nine countries -- France, Germany, Austria, Spain, Belgium, Switzerland, Sweden, Italy and The Netherlands -- before it culminates in Rotterdam, on November 8. The stops will see the Clarendon-born artiste performing in some of the major cities in these countries.

I-Octane told the Jamaica Observer that he is looking forward to returning to Europe, a major market for his brand of reggae.

"I have matured as an artiste and expanded my repertoire and I'm looking forward to sharing that with my European fans. I am also going as a solo act this time and that is a great accomplishment for me," he said.

For him, Europe holds a pride of place due to the loyalty of the fans on that side of the 'pond'.

"Europe has done a lot for artistes in general, not just for reggae. Even though each market has its own unique advantages, Europe is one of those places that is extremely loyal. Once they accept and love you, they love you for life. It doesn't matter whether you are current or considered to be in the top 5. Europe is more focused on the music itself instead of the hype that surrounds it. That is important in an industry where great talent can easily be overshadowed by other things. It is great that there is a place that is always willing to accept and stand by positive music," I-Octane explained.

Source: Jamaica Observer
Posted by Dancehallreggaeweseh.com at 11:36 AM 5 comments: