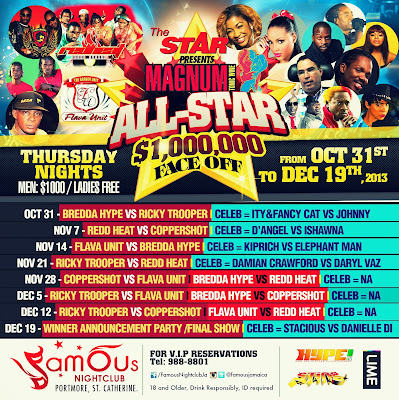 KINGSTON, JAMAICA: THE STAR will be embarking on a new eight week series at the Famous Night Club on Thursday. The Magnum All-Star, 1,000,000, Face-off, will featuring selecting battles between 5 popular sound systems/selectors and some local celebrities.
We are inviting you to attend the first event which will see Ricky Trooper taking on the St Elizabeth based Bredda Hype and celebrities Ity and Fancy Cat going up against Johnny Daley. Future weeks will have other interesting battles such as politicians Damion Crawford vs Daryl Vaz.
If you interested in attending this event please contact us at 932/6249 or 844-7827 so that we can add you to the guest list. The event will begin at 11p.m.
We have attached the full schedule for the eight weeks.

Posted by Dancehallreggaeweseh.com at 11:36 AM No comments:

KINGSTON, JAMAICA: Some heterosexual men are complaining that they are being 'targeted' and harassed by some members of the homosexual community while walking in the New Kingston business district.

Alphanso Roberts told THE STAR that he has been, 'verbally harassed' by men who dress like women.

He said, "I was walking on the road in the New Kingston area one night and then mi hear smady a call after me, yuh know like how a man woulda call after a woman. When mi look is a bag a man who dress up like woman a call to me."

He told THE STAR that he was shocked by the 'brazen' approach, "mi did surprised because mi always hear bout dem tings deh but mi neva see it before. Mi jus tek weh mi self afta dat."

Meanwhile, taxi operator Leroy Allen told THE STAR that on more than one occasion he has witnessed this display.

When THE STAR asked Allen what he meant by 'stop that' he elaborated, "when them inna mi vehicle a call after man, it nuh right and it nuh look good."

But Puncy, a cross-dresser (man who dresses like a woman) told THE STAR that the approach only occurs when men are in what he calls their 'zone.'

He said "we are in our zone and if we see someone (a man) walking we are gonna holler at them."

When THE STAR inquired what he meant by 'the zone' Puncy said the zone refers to where he and others ply their wares. "I am in my zone doing my work, my job is to do my work and go home."

Puncy is not only a cross dresser but a sex worker as well in the New Kingston area.

Meanwhile, another cross-dresser, who calls himself Pearl, told THE STAR that he does not make it his duty to go after straight men but instead said, "I do attract straight men, I just can't keep them off me."
Allen along with Roberts, told THE STAR that although they do not have any issues with homosexuals, they both agree that it is immoral for these men to be dressing as women and make unwanted advances at men.

When contacted, the New Kingston police told THE STAR that they have received multiple complaints from men who have been harassed by some cross-dressers in the area.

The officer also told THE STAR that some of these men after making the complaints are afraid to point out the 'men' who made the advances.

"We haven't made any arrests so far in relation to that because the men are usually afraid to point them out because of the stigma of being touched up by a homosexual," he said.
Names changed
Source Jamaica Star

Posted by Dancehallreggaeweseh.com at 1:30 PM No comments:

NEW MUSIC VIDEO: I-OCTANE - "LOVE YOU LIKE I DO”

Posted by Dancehallreggaeweseh.com at 4:01 PM No comments: 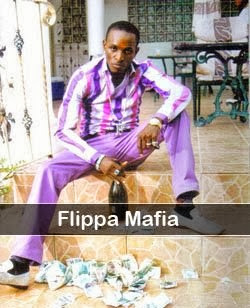 Fall of the ‘Flossing king’
IN an arena known for flamboyant characters, deejay Flippa Mafia certainly stands out even though he does not have a major hit song.
The 34-year-old Mafia (given name Andrew Davis) is also known as the 'Flossing King'. He and eight other persons are facing charges of cocaine trafficking in the United States.
Federal authorities say he was arrested September 16 in Los Angeles, California, as the mastermind of an illegal drug network that operated between that state, New Jersey and Philadelphia.
He was extradited to New Jersey early this month. His younger brother, Kemar Davis, is among those arrested.
Flippa Mafia also faces money-laundering charges.
The authorities say between March and May, detectives recovered more than 26 kilograms of cocaine, worth approximately $780,000, two handguns, and more than $600,000 in cash from Flippa Mafia's associates in New Jersey and Philadelphia.
Investigators say this is "a small percentage of the total amount of cocaine brought into New Jersey
by Andrew Davis' drug-trafficking organisation."
Flippa Mafia was known to dancehall fans for hurling hundreds of dollar notes into the crowd during his performances.
After repeating the act at last year's Sting, it prompted talk that he was involved in illegal activity. He denied this in an interview with the Jamaica Observer last December.
"It is not about the hype, but if one is singing about a particular lifestyle his/her actions should portray that," he said.
"I have been throwing cash for years so if that was the case there wouldn't be a need to be doing it now. There are some entertainers who will 'floss' their money, take drugs among other things. I just do whatever makes me happy," he added.
Flippa Mafia said his banquet hall and nightclub in Philadelphia were his main source of income.
Mafia grew up in Waterhouse, and attended Norman Manley High school in Kingston. Some of his better known songs are Unfinished House, Star ah Star and Hear mi Hear.
Source: Jamaica Observer
Posted by Dancehallreggaeweseh.com at 12:21 PM 3 comments: 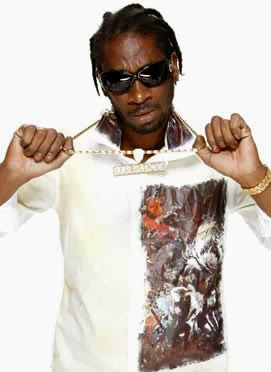 From bottles, fashion and clashes:
By Howard Campbell Observer senior writer
Kingston Jamaica -THE offices of Supreme Promotions were being renovated last week, leaving its head Isaiah Laing to conduct business in an office bare of furniture.
It is the busiest time of the year for the 56-year-old ex-cop. He is gearing up for Sting, the dancehall extravaganza he started 30 years ago.

This year's show will again be held at Jamworld in Portmore, St Catherine. For the second straight year, it is a joint production between Supreme Promotions and Downsound Records.
Sting was first staged in 1984 at Cinema 2 in New Kingston. It was held at the dawn of modern dancehall's digital age and featured singers Sugar Minott, Tenor Saw and Michael Palmer.
The genre's biggest names have played the Boxing Day show over the years. Reputations have been made at Sting, the pride of high-profile artistes have been hurt.
That unpredictability prompted Laing to boldly declare last week that "If Sting dies, dancehall dies." 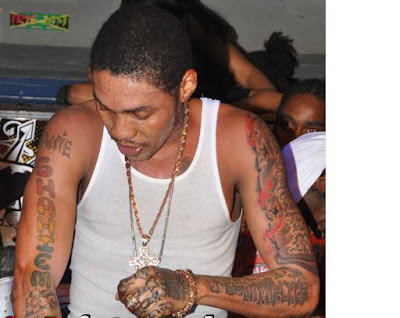 He uses the roll call of artistes who got their start on his show to reinforce his boast.
"Sting made Bounty (Killer), Vybz (Kartel) and Mavado. It put them where they are today," Laing said.
Each of those artistes have engaged in the theatrics that has helped make Sting a dancehall spectacle. Despite its notoriety, many artistes scramble to get on the bill.
Artiste manager and publicist Ray Alexander believes Sting has helped develop the dancehall brand.
"It's the only show that caters for dancehall artistes and fans. It gives the artiste who does well a lot of exposure because promoters want them, especially in the UK," said Alexander. "If you do well on Sting, you can do well anywhere."
Thirty years is quite an achievement but even Laing agrees that artiste clashes and fans hurling bottles at unpopular acts, has hurt Sting's image.
"Some of the things that happened I wouldn't want to re-live, but that's history," he said.
Super Cat and Ninja Man, two of the artistes who figured in arguably Sting's most infamous clash, are back for the 30th anniversary show.
The former was pelted with 'missiles' during the 1991 renewal at the National Stadium, which led him to threaten a section of the hostile audience. 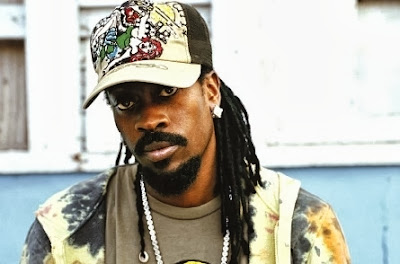 Many associate Sting '91 with that incident but Laing has fonder memories of that year.
"It was our biggest show, we had 42,000 paying patrons."
There have been low points too. Laing says the 1999 event at Jamworld flopped after headliner Capleton withdrew three days before show-time. He refused to perform once Beenie Man was on the card.
Closer to home, Laing says he has sacrificed a lot to keep Sting alive. This includes the loss of five apartments and a house.
Laing, who is from rural St Catherine, launched Sting after promoting a clutch of successful dances at Spanish Town's Prison Oval and Cinema 2.
In 1984, he was known nationally as a no-nonsense street cop, working some of Kingston's toughest areas.
His moonlighting as show promoter did not impress his superiors at the Jamaica Constabulary Force. It is widely believed that friction led to Laing leaving the force with the rank of detective sergeant after 20 years service.
Laing credits his tenure in the police force for keeping Sting on the frontline, when many of its contemporaries have folded.
"I remember the days when me an' gunman shoot it out, dem get wey but it was back on the job next day. It's basically the same with Sting, yuh have to fight even when it tough."

Posted by Dancehallreggaeweseh.com at 1:39 PM No comments:

Posted by Dancehallreggaeweseh.com at 11:54 AM No comments:

Posted by Dancehallreggaeweseh.com at 8:47 PM No comments: