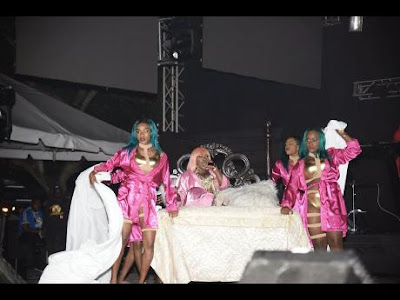 MONTEGO, JAMAICA - With dancehall artiste Spice being among the few female acts on the Reggae Sumfest line-up for Dancehall night, the queen of the stage did not disappoint, as her performance earned her a place among the event's top performers last night. 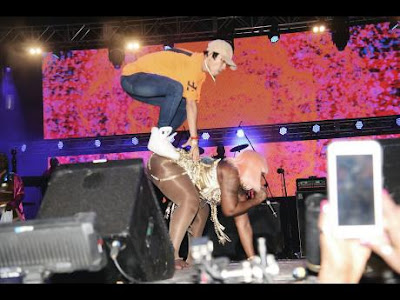 Spice transformed the stage into her bedroom, literally. Known for her usual stand out entrances, Spice made her way to the stage on a bed accompanied by her dancers, all clad in robes.

The entertainer emerged from her bed and went straight into a rendition of her song, Sheet. Calling for a man to join here on stage, Spice engaged the audience from start to finish and earned one of the biggest forwards of the night for her efforts. 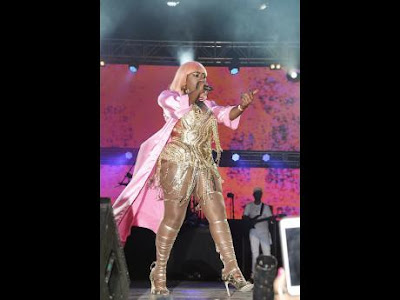 Spice, decked out in a body fitting-gold suit beneath the robe, delivered songs such as Indicator and So Me Like It.

CHECK OUT HER FULL PERFORMANCE BELOW

Posted by Dancehallreggaeweseh.com at 10:34 AM 6 comments:

Email ThisBlogThis!Share to TwitterShare to FacebookShare to Pinterest
Labels: Spice 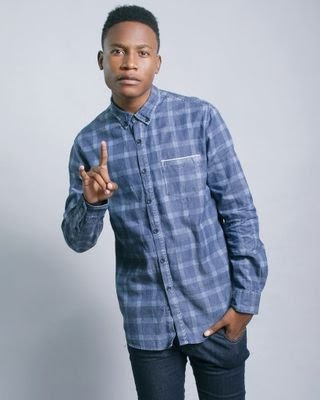 Better Place speaks about uplifting oneself and others, despite the struggles which one goes through daily, the song encourages everyone to not give up.   In whatever field of work, one can agree that to live each day is to survive and as such being alive is a blessing.

After being placed third in the Digicel Rising Stars Competition in 2011 at the age of 16, Delando Colley sought to follow his dream as an artiste and further his passion at the Edna Manley College of Performing Arts.  Fast forward to present year 2017, on the scene with a few singles, Better Place seeks to re-introduce Delando to Jamaica and the world with his catchy hook.
“I’m gonna take myself to a better place, no matter how long it takes I will be fighting on the way…”

Black Mattic known for hits such as “Hero Dance”, “3310 Rock” and “2lb sugar” has been working on his latest album “Press Play”.  He recently stated “This thing that we call the music industry is very tricky and it can be complicated at times.  Other musicians and djs will try and stop your progress if they recognize how great your potential is.   I have experienced this first hand since the merger of OHMG, which is my label and ZJ Elektra’s label EMG. I have no doubt Delando shares a similar struggle with his musical journey.  I believe this fight spreads beyond music into all sectors.  Despite this, they fail to understand that this propels us to work harder and smarter. Better Place will serve as a motivational song for our peers as this was our intended message.”

Posted by Dancehallreggaeweseh.com at 9:52 PM No comments:

KINGSTON, JAMAICA - Former Magnum King of the Dancehall winner Devin Di Dakta has become the first winner from the televised competition to enter the Billboard charts.

Devin is featured on the track Oh Devil by California band Electric Guest.  The song enters the Billboard Hot Rock Songs chart at number 47. It was released by Downtown Records.

In a media release, Devin spoke about his latest accomplishment.

‘Making the billboard chart is a great accomplishment that I'm thankful for. I’m feeling excited right now’, he said.

The collaboration came about after an A&R from the California based Downtown Records reached out to Devin’s management after watching YouTube clips of his performance during the Magnum King of the Dancehall competition.

‘They reached out to us about the feature on the song after they saw my work on the internet and fell in love my musical style’, said Devin.

“Devin cracking the Billboard Hot Rock Song chart with this collaboration is one more way that Dancehall culture has broken through the glass ceiling of popular international music.  We are extremely proud of Devin’s accomplishment, especially following his Grammy nomination this year.  We are happy to support his career from Magnum Kings & Queens to the Grammy’s and now to the Billboard Charts’, said Tamika West, Marketing Manager, J Wray & Nephew Ltd, title sponsor for the Magnum King of the Dancehall competition.

She added ‘It’s amazing that a local television show such as Magnum can be seen internationally as a platform to discover new talent’.

Devin is currently promoting the song Beautiful and is set to release another single Get Hot. Videos for both songs are to be completed shortly.

He is also booked for Reggae Sumfest Dancehall Night.

Posted by Dancehallreggaeweseh.com at 8:31 AM No comments:

KINGSTON, JAMAICA - The police are probing the contract style killing of popular 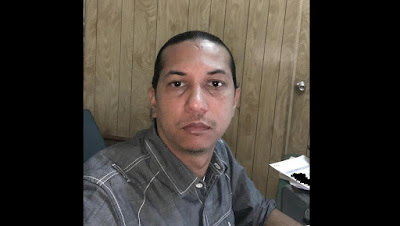 businessman Richard Ramdial, whose family operates Ramdial Auto Sales and Accessories on Beechwood Avenue in St. Andrew. He was shot was in traffic sometime after 4:40pm along Ruthven Road on Tuesday afternoon when two men reportedly approached his dark blue Mercedez Benz SUV and pumped more than a dozen bullets through the window on the driver's side.

Some reports say that the killers were two men in a white Toyota Camry motorcar which was parked on Ruthven Road, but other reports say the killer was a lone man who subsequently escaped on a bike. Alighted the vehicle and opened fire on Mr. Ramdial who was driving a Mercedes Benz.

The businessman was taken to the University Hospital of the West Indies where he was pronounced dead.

The incident caused panic as several motorists attempted to flee the scene when the barrage of gunshots were fired.
Mr. Ramdial’s licensed firearm was not taken by his attacker
Posted by Dancehallreggaeweseh.com at 7:06 AM No comments:

Email ThisBlogThis!Share to TwitterShare to FacebookShare to Pinterest
Labels: NEWS

On-the-rise dancehall artiste Kenniel Brown, aka Kenny Bling, has vowed to make his mark in 2017 and with the summer upon us, the singjay looks set to make that promise a reality. His Afar Music Group-produced single, Mi Chargie, is proving to be the perfect remedy for Dancehall hungry fans. On the infectious Level Up riddim, Mi Chargie can best be described as “a reality tune that couldn't be any more real”. It tells the true-to-life experience of the singer/songwriter, Kenny Bling, and its themes of friendship and loyalty are two which many can closely identify with, and have not hesitated to embrace.
"I am singing about my own life… the friends around me and how we live. Genio, one of the names mentioned in the song is a real person. He is a loyal friend from a long time," explained Kenny Bling, who credits his father, veteran dancehall deejay Oneil “Scully” Brown, with instilling in him the passion for music. Kenny added that with the loads of positive feedback that he has been receiving, Mi Chargie "looks like the one".
The single has been enjoying high level rotation in places as far away as Russia, a few countries in Europe, nearer home in the US and, of course right here "a yard". Among the radio stations in Jamaica that have been showing love for Mi Chargie are Zip, Irie FM, Hitz and Suncity, and Kenny Bling is more than pleased. Interestingly, the streets have also stepped in and taken the song to another level with big name selectors including Boom Boom giving Mi Chargie the seal of approval with massive airplay in the dance.

Hard on the heels of the label releasing Kenny Bling's first single for them, Afar Music Group (AFM) in recognition of Kenny's immense talent and potential, has signed the artiste to a recording contract. Eager to get back in the studio, the AFM team has already started a new project, but the main focus for now is the marketing and promotion of Mi Chargie, especially in the lead up to Jamaica's internationally acclaimed annual Reggae and Dancehall festival Reggae Sumfest.
With Mi Chargie
poised for the big time, Kenny Bling and his team have taken the decision to shoot the accompanying music video. This, Kenny says will be done in the next few weeks. The location will be Stony Hill in Kingston, Jamaica.

Posted by Dancehallreggaeweseh.com at 5:24 PM No comments:

Posted by Dancehallreggaeweseh.com at 4:47 PM No comments: