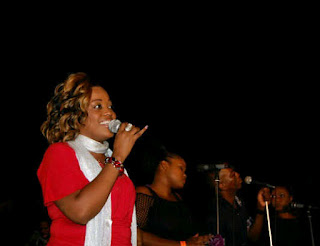 An awesome two-show stop in Guyana during the Easter weekend has left rising female gospel artiste, KG, in a jubilant mood, even as she declares that her faith was tried.

The singer, whose dancehall and soca-flavoured gospel songs are become as popular as her traditional repertoire, got a pleasant surprise when she slipped into Guyana on the weekend of April 8. Although the promoter had told her that the people in Guyana knew her songs, the affable KG had no idea that the word 'popular' would easily be a fitting description.

At the first show on April 8 at the Kwakwani venue, which is outside of the city, KG's fans delighted her with their word-for-word singing of some of her songs. Entitled  Rhema Praise, the concert also featured a line-up of the best gospel acts in Guyana, but it was KG's soca-flavoured Ride Out the Storm that sent ripples throughout the venue.

"I was so pleasantly surprised that the song is so well known in Guyana," KG beamed, with her trademark brilliant smile. "The presence of the Lord was in the place and the people were caught up in giving glory to God," she said of the rollicking praise-and-worship session during her time on stage.
KG, whose repertoire of in-demand songs is growing, also performed Highly Favoured and Blessed, Lifting Up Praise To You, Who Me Yuh Mad and others.

The following night saw KG in the heart of the city, Guyana's capital, Georgetown, where the folk there were equally responsive, but hooked on a different tune. And, although not billed as the headline act, the task of closing the event, The Real Easter Praise, was passed off on a surprised KG.
"I was at the venue waiting to perform, but each time I asked about my time slot, I was asked very politely to wait a while. Eventually, I was advised that I would be closing the show," KG explained.

It was a curve ball that KG, the only female act on the line-up, handled well. The Georgetown crowd embraced her and enveloped her in Christian love as they enjoyed a real  gospel party with their favourite KG song, the dancehall-flavoured Who Me, You Mad.  KG ministered exceptionally well and during the song God Alone, she made an altar call, which saw five persons in the audience making the bold decision to give their lives to God.

"The moment was so powerful that many of us had tears streaming down our faces. It is never about me or my ability to sing, it is always all about saving souls for Christ. I am just a messenger," KG declared, brushing aside any suggestion that she should take credit for transforming lives.
In closing she noted, "Look out Guyana, you'll soon be seeing and hearing more from KG!"

Posted by Dancehallreggaeweseh.com at 10:05 AM 64 comments:

DID YENDI AND ASAFA PLAN PREGNANCY?? 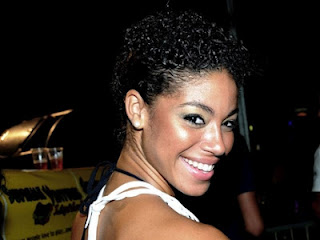 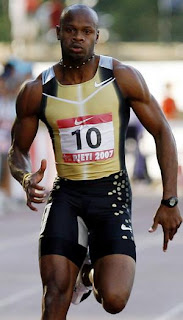 Since Yendi is 17 weeks pregnant, and Ameta from FIWI Choice is 13 weeks pregnant, Mi affi wonder if Yendi did prips Asafa from early out an mek him kno say a lickkle bun inna di oven and him ketch him jealous n run go pop a breed pon Ameta, fi show di world say him can dweet to.  Well good for you… MISSION ACCOMPLISHED!!! If only you coulda connect like dat pon di Track
Posted by Dancehallreggaeweseh.com at 4:34 PM 34 comments:

I-OCTANE TO DO FREE SHOW IN SAVANNA-LA-MAR 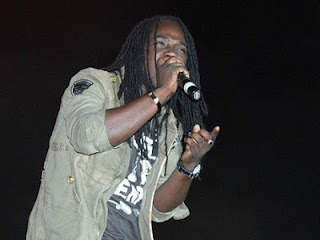 ·         I-Octane and the promoters of Western Kite Festival have reached a compromise.
Promoter of the event, Tia Rainford, said both parties have come to an agreement to stage a free show, 'I Octane Live in Concert' in Savanna-la-mar.
On January 1, I-Octane was contracted to work at the Kite Festival at Mannings School ground, but exited the stage before the end of his 30-minute set because of technical difficulties.
However, Rainford insisted that the artiste had breached his contract.
According to Rainford, "The patrons from the Kite Festival were not satisfied that the show had ended prematurely on January 1. I -Octane and I compromised on a free show to give back to the patrons of Savanna-la-mar who had turned up at the festival. There will be some local artistes on the show but I-Octane is the only headlining act," she said.
When contacted, I-Octane said he was eager to give back to his Savanna-la-Mar fans.
"I agree that the show ended prematurely, and at the end of the day it is all about the fans. The promoter is someone that I have a great deal of respect for, and I am glad for the opportunity to perform for my fans. Savanna-la-mar is one of the first places to embrace I-Octane, so mi just want everybody come out for the free show and they won't be disappointed," he told THE weekend STAR.
The event is slated for April 28 at Coconut Grooves, Llandillo Main Road. Gates will open at 7 p.m.
Source: Jamaica Star
Posted by Dancehallreggaeweseh.com at 2:13 PM 1 comment:

Posted by Dancehallreggaeweseh.com at 3:12 PM 2 comments: 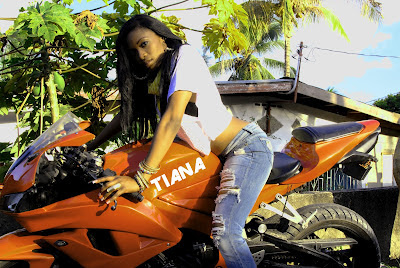 For future interviews you can contact Tiana at 876 381 3874
http://www.youtube.com/tianamusicvideos
Posted by Dancehallreggaeweseh.com at 11:20 AM 70 comments: