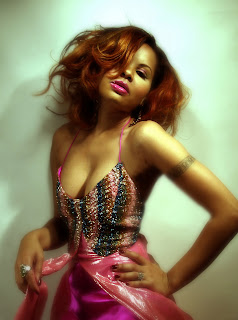 Deejay Ce'cile has found herself comfortably positioned between the pages of Playboy magazine, and she is loving it.
"It's just great," she says, giving a coy smile and playfully striking a Playboy kind of pose.
The August issue of the German edition of Playboy features a review of Ce'cile's newest album, Bad Gyal, making her among the few dancehall artistes to appear in this publication. She joins the likes of Shaggy and German reggae act sMono and Nikitaman to be featured in the review section
"Of course, this feature in Playboy magazine is really a plus. It is very rare for Jamaican dancehall musicians to make this publication and hopefully this means that more of us will make it in the review pages. Millions of people read this magazine, so immediately there will be a lot of exposure for me and the product," she says.
Ce'cile notes that this is a great way of promoting the CD and building on the fan base that already exists in Germany. The artiste who recently returned from an European tour promoting the CD, says the tour went well and they covered a lot of ground in the couple of weeks on the road appearing at the major festivals.
She explained that Bad Gyal is strictly for the European market and an intense marketing and promotional campaign is in progress. There are 18 tracks on the CD, including a remix, featuring Shaggy, of the runaway hit single, Waiting.
Posted by Dancehallreggaeweseh.com at 4:17 PM