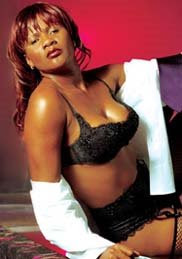 Topflight female deejay and ‘first lady’ of the dancehall, Lady Saw or better yet ‘Muma’ has been nominated by EME (Excellence in Music & Entertainment) for female DJ of The Year at the awards ceremony on Thursday, February 5 at the Pegasus Hotel.
She is also nominated for the Youth View coveted award Favourite Female Dancehall Artiste. The award ceremony will be held at the National Indoor Sport Centre on Saturday, February 7.
The illustrious deejay whose single ‘Your Boyfriend’ is #16 on the Hype TV Single Chart and the accompanying video went #1 on all local video charts namely, RE TV, CVM TV and Hype TV.
She is also been nominated for the Hype TV Music Awards, to be held at its studio on Thursday, February 26.
For the second half of last year, Muma Saw stepped to the forefront of the entertainment scene, locally and internationally stamping her class wherever she performed as the undisputed ‘first lady’ and ‘queen of the dancehall.
She put in classic performances at Digicel’s promotional shows, the Digicel Caribbean Championship match at the National Stadium and the recently held Shaggy & Friends charity, which brought out her compassion for children.
Posted by Dancehallreggaeweseh.com at 1:26 AM