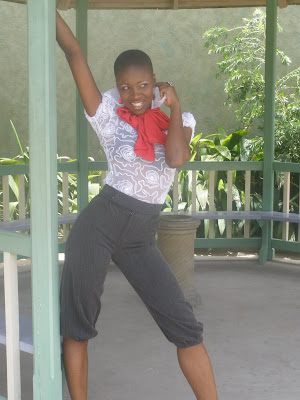 Oh looky here, people. Guess who’s returning to radio? None other than the irrepressible DJ Flamze.The enigmatic and colourful Sidony ‘DJ Flamze’ Smith may be returning to prime time radio in the next coming weeks, and she may be returning to one of her old haunts to blaze the airwaves once again. Last year, the DJ was ousted from the 1- 5 p.m. afternoon programme by RJR bigwigs who wanted to replace her with the bodacious Ms. Kitty.
There was a bit of a brouhaha which turned nasty on the Internet and then leaked into the daily papers, but Flamze walked away strengthened by the ordeal and landed gigs on HYPE TV and even co-hosted their inaugural HYPE TV awards show earlier this year.

Last night, she showed that she’s still got crazy skills on the ‘wheels of steel’ when she played alongside Nico Bam Bam during Up and Live. Some of the rumours circulating in the industry suggest that she may be returning to ZIP FM. One876entertainment called the radio personality who artfully dodged the question.

“Yes, I am definitely eyeing a return to radio, I have a number of options I am looking at it right now, but I can tell you this, it will be a return to a station that I worked for before, and it’s going to knock the socks off a lot of people...that’s all I am willing to say at this point,” she said.

DJ Flamze has worked on a number of radio stations including Links FM, Vibes FM, Zip and then RJR.
Posted by Dancehallreggaeweseh.com at 1:03 AM