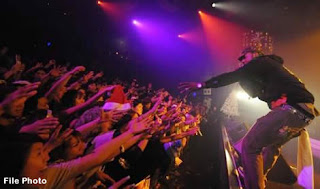 Things did not work in favour of international recording artiste DåVille, as he would have wanted to, but he still went on to give an excellent performance at Reggae Sumfest International II on Saturday, July 25, despite a minor furor on stage.
The singer, known for several popular songs including his most recent chart topping hit single ‘Missing You Right Now’ and the promising ‘Never Gonna Cry’ single, performed for 20 minutes, but was not pleased as he didn’t get the chance to give fans the additional treat he promised.
Apologising for losing his cool, DáVille said he had planned a special performance paying tribute to two special persons – the ‘king of pop’ Michael Jackson and his former road manager Robert Bogle (who died last year from sickle cell), but when he saw that the props he had invested in was not to be, he said he felt ‘dissed’ as no one told him that his elaborate presentation would not have been possible.
It was DáVille’s second time performing at the annual Reggae Sumfest. The first was in 2007 when he delivered well among the impressive lineup.
“I am grateful to have performed on both shows. At first when I saw the running order and the time that I was to perform, I was somewhat skeptical, but I was so confident about giving patrons a real good performance that I just said to myself, it doesn’t matter if I am too early or too late, I am going out there to do what I do best, give an entertaining performance,” DáVille said.
The singer said Sumfest was behind him now and he just had to concentrate on his upcoming European tour and other gigs he has scheduled for the Caribbean. He will be the special guest artiste at Mighty Crown’s annual Reggae Festival – Yokohama Reggae SAI – on August 16 at the Yokohama Stadium in Yokohama, Japan.
During his trip to Japan, DáVille will also promote his ‘Icheban’ album on which he has the collaboration title song with Japanese reggae group Fire Band. After Japan, DáVille will then embark on a tour of Canada.
During his busy schedule, the singer will be shooting the final clips for another music video, fine-tuning some lyrics he has penned then heading into the studio for some vigorous recording sessions.
“My fans can continue to rely on me to continue making satisfying music for their ears,” said DáVille.
Posted by Dancehallreggaeweseh.com at 9:25 AM