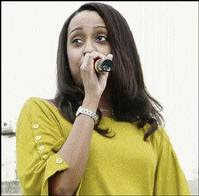 • Songstress Alaine and producer Don Corleon have parted ways after four years of making music together. The singer is now putting together a new team of professionals to continue making strides in the business.

Not discussing much about the reasons behind her split from manager and producer Donovan 'Don Corleon' Bennett, when the singer spoke with THE WEEKEND STAR yesterday she was her usual cheerful self, as she talked about her future and her time with him. Alaine, however, did state that it was an amicable split on her part.
She said, "First of all I have to big up Don all di way. He is 100 per cent an amazing producer and we've had a lot of success together. We just returned from Japan where we released my second album 'Luv-A-Dub' and it has been doing great, getting serious album sales which is a big feat. It was a very beneficial positive experience, still is, but we're no longer working together."

After working as an investment banker in the United States, Alaine moved back to Jamaica in 2004 to pursue her passion for music. Upon returning, she met with producing trio DASECA who launched her singing career and in 2005, met and started working with Don Corleon.
With Corleon, she achieved her first breakthrough hit, No Ordinary Love and followed with songs such as Heavenly, NeverDone and others. Through Don Corleon Records, Alaine released her 2008 album 'Sacrifice' and in August of this year her second album 'Luv-A-Dub' was released in Japan.
While rumours have circulated that the two's relationship was more than just music - neither party confirmed. When Alaine spoke to THE WEEKEND STAR, she was still adamant that her personal life is personal, but did say that rumours about the two being married were false.
As to whether the two will ever work together in the future, Alaine said, "I'm not a fortune teller but wherever there's good music and good vibes, I can work with it."
Currently the singer says there is more to come from Alaine, as there is a lot in the pipelines, including putting together a new team which includes, persons involved in her management and bookings.

I'm continuing to work and keep smiling, making some strides. I have some work to do in Africa as part of a show that is to be broadcasted in a number of countries. Everyday I'm a new me and trying wonderful new things," she said.
For Alaine, it's all about new beginnings as she doesn't believe the split will affect her fan base or her career negatively. She explained, "I think people just wanna hear songs I write and they want to connect with my music which they will continue to do. It's still me, nothing different. I'm not starting over, I've laid a foundation for myself and travelled all over the world. People have identified and grown with me so it's a continuation of a wonderful opportunity."
For a singer who has worked almost exclusively with one producer for a number of years now, Alaine says she has done good work with a number of successful producers and will continue to do so. Not elaborating on some of the persons she will be working with in the future, Alaine mentioned that she does have a new single out, called, So Simple for Supa Hype on his 'Sunshine' rhythm that has been doing well.
SOURCE: Jamaica star
Posted by Dancehallreggaeweseh.com at 12:07 AM