VEGAS AND BOUNTY KILLER BUILD A VIBE AT HOT 97 SHOW 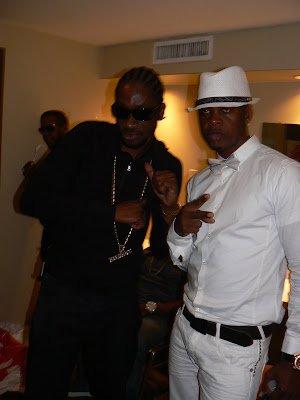 I Am Blessed singjay Vegas and the Warlord Bounty Killer hung out together backstage at the HOT 97's 'On Da Reggae Tip' concert, talking, vibing and even taking pictures for the press and fans.

"Me and him hold a reasoning backstage. Killa ah mi dupes, I don't have no problem with Killa, you know him personality, and if yu follow him up wid him aggressive personality, yu know wha a go happen. Nuff people tek it on and it nuh work out fi dem," Vegas said.

Vegas and Bounty Killer had had an acrimonious relationship in the past and Killer had referred to him using several derrogatory names in the past but now they seemed to have buried the hatchet.

"Anyway, I respect Bounty Killer because yu have nuff artiste who buss internationally like Sean Paul and dem coulda bring yutes wid dem, like how Akon pick up Kardinal Offishal and buss him internationally. Mi rate Killer because him break crazy yute inna the business and yu caan deny him that. Me and him had issues but mi remember when me and him and Tyrical used to de rounda Junior Reid studio, so mi see the good side of Killer. Me and Mavado good, mi come from Big Yard, Mavado come from Cassava Piece and him never show mi no hype yet, him and Serani dem always show mi maximum respect, so right now, mi ah say good over evil."
Posted by Dancehallreggaeweseh.com at 8:14 PM