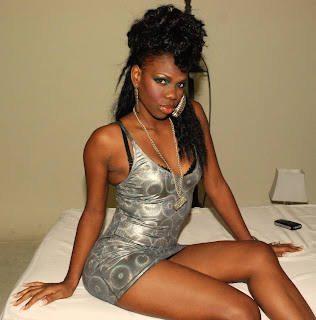 The streets are buzzing over Baby Tash's marquis performance at West Kingston Jamboree in Tivoli Gardens over the weekend. Hitting the stage a few minutes after 4 a.m., Tash delivered a set that has established her as one of the hottest young female acts to have emerged in 2009.

She performed a few minutes after Vegas closed the second segment of the West Kingston Jamboree, and some juggling by the Swatch International sound system, setting a wicked pace for the other females to follow.

Wearing a short body-hugging dress, she walked on to the stage to loud screams as she deejayed Mix Up. The girls screamed their approval as her voice cut through the early morning air with great clarity as the former Magnum Kings and Queens contest winner did a medley which included the stage show hit, Talk the Tings Straight. Then she closed a well received segment with her huge hit Facebook, but interestingly did not earn a big forward immediately. Instead, the members of the crowd seemed to be in awe as Baby Tash, working on a band for the first time, showed total command of her hit tune.

One girl remarked, her mouth in a perfect o of surprise: 'Den ah so she bad! Me never know. Gwaan Baby Tash!'.

The dancehall massive can next see her perform at Island Xplosion in Clarendon on December 24th, GT Taylor's Xtravaganza on December 25th in St. Elizabeth and Pepsi Teensplash on the 26th, Boxing Day, at James Bond Beach, St. Mary.

After Baby Tash performed, Tifa came on to rock the crowd with Spread it Out', while Stacious, dressed in a titillating sweatsuit that accentuated her curves, raised eyebrows and stirred laughter with 'Head', and won over the rude bwoys with her opening tribute to the fallen soldiers of Tivoli, earning a big roar when she mentioned Jim Brown's name.

Bridgez performed well but Pamputtae was clapped off by the crowd who thought she overstayed her welcome and maybe was a bit too raw. Spice scorned dem and closed off the female segment.
Posted by Dancehallreggaeweseh.com at 10:15 AM