LISA HYPE EXPELLED BY THE TEACHA 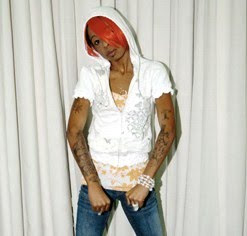 Former Portmore Empire First Lady Lisa Hype has been expelled from the Portmore Empire by Empire CEO Adidja 'Di Teacha' Palmer after what a release called her 'overall conduct' which was "not consistent' with what is expected of members of the group.
"Lisa Hype is no longer a part of the Portmore Empire. The members of the Empire have unanimously agreed to end our professional relationship especially in light of certain 'developments' that have come to our attention regarding her overall conduct, conduct that is not consistent with the decorum expected of a member of the Portmore Empire. She is an incredible artiste and we wish for her all the best in her future endeavours, but Lisa Hype will not play a future role in the Empire as she no longer fits in with our organisational goals as we move forward in 2010," the release said.
Posted by Dancehallreggaeweseh.com at 6:49 PM