WHAT OF THE ENTERTAINMENT SCENE 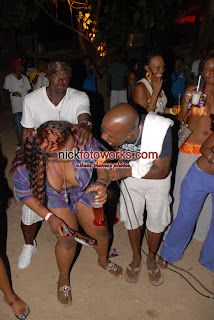 Well Christmas is almost here and despite the number of job losses, promoters are still (just like radio stations) trying to get a piece of the sponsorship dollar and hopefully cash in on a successful party. It has been a very challenging year on the entertainment scene. So many things make it tense at the moment: our music is not selling as it used to, demand for dubs are down, a number of the promoters who had the money that needed cleaning who used to put on sessions have been locked up or in hiding, the 'get rich schemes' are a thing of the past, the once vibrant lotto scam artistes are being killed or scraped up (plus they have to put their flossing under control), the government's deadly tax collectors are on the prowl for the big spenders, the police and parish councils have party promoters by their balls and at will do away with permits or refuse permits.

The mayor of Kingston has now said that promoters will have to pay a $50,000.00 cess as it is costly to clean up after them. In addition, I saw an article in one of the dailies that the government is now seeking to rely on tax collection by consumption tax; if this is true then the cost of putting on a party will become more expensive and either the promoters pass on the costs to the patrons or suffer a slimmer profit margin. This is definitely going to be an interesting situation ; especially since a number of parties have flopped since year with scanty numbers in appearance or person who attended barely bought liquor.

Let me add the wrench to the whole situation: the police recently issued a statement to the effect that if a party is being held in an area which they deem to be a tense or dangerous area, they would revoke the permit. I can see how this is going to heighten tension because more than likely subjectivity is going to rule high in the decision. What factors are they going to use to say an area is unsafe to keep a party? Please don't use the response that anywhere where there is likely to be an outbreak of gunshot or physical violence because that would be everywhere in Jamaica, look at what happened at the Quad, most recently Fiction, NO WHERE IS IMMUNE.

Danville Walker has had to find innovative ways to stimulate persons to bring things in through the port (now offering a flat rate to importers) when normally we are accustomed to having a backlog at the port starting from November; vendors in Downtown Kingston who are a great indicator of the economy are complaining that this year will not be a good year; many hairdressers and barber are seeing their clients less; people are recycling their clothes more and I could go on and on.

So how are we going to many partying fun again? No concept is new; nothing is more exciting than the other. We have seen it all before heard the music all before. Everything is the same except the financial state of the country. How does a cut off time of 12 am Monday - Thursday and 2 am on weekends work for promoters. How does it help to increase the profitability? We talk about building a vibrant entertainment industry, but it is more than just making music, videos and films (let's not even go there on the latter). The outlet music is not only on the internet, tv and radio, but also parties and promoters are feeling it. When they feel it there is a multiplier effect; from payments to hairdressers, barbers, wig shops, clothes shop, liquor retailers, taxi men, vendors, sound systems, deejays, security personnel and more. What's going to happen next year? Hotels get moratorium; why can't promoters get a break too?

Posted by Dancehallreggaeweseh.com at 8:20 AM