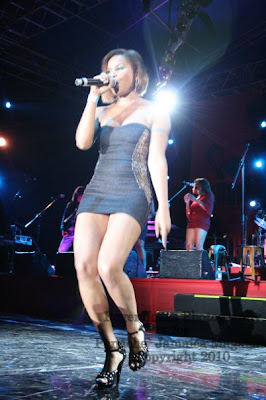 Confident, independent girl Ce’Cile is “preeing the present” and proclaiming to all and sundry that “ova no man (she) nah siddung and fret, cause a million more a tek set”. This is the chorus from her latest single, which has been floating through the air waves with amazing regularity.
Balancing her swagger on this catchy tune, appropriately entitled, Nah Stress, Ce’cile looks to score with this energetic girls’ anthem. Produced by Big Yard on the Street Bullies riddim, Nah Stress is a real walk out song — “relationship done, you know a me lef’ — that the females can readily identify with and have been requesting both in the dancehall and on radio.
“It’s a song of empowerment for the ladies,” Ce’Cile says with her ever-confident smile. “The message is that there is too much to live for to allow a failed relationship to make a woman sit down and get depressed. Of course, a healthy relationship is important but if it’s not working, then it’s move up time,” she said.
Ce’Cile, who recently took home the Excellence in Music and Entertainment award for Best Dressed Female, is known for her consistency, whether as her Bad Gyal alter ego, or as Ce’Cile.
She has swaggered off to a running start for 2010, and in addition to Nah Stress, she has been rocking the airwaves with the Don Corleone-produced single, Anything, on the Feminine riddim.
Posted by Dancehallreggaeweseh.com at 11:40 PM