DUANE STEPHENSON WORKS ON PROJECT WITH I GRADE RECORDS 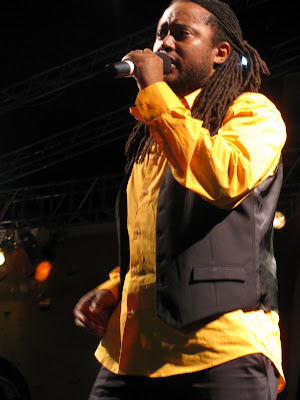 Reggae singer, Duane Stephenson, who is finishing up work on his follow-up album to his ground-breaking debut, August Town, has also been working on a project with I-Grade Records, based in St Croix, the US Virgin Islands (VI).
“I went down there to do a show and the energy was just natural. I Grade shares the vision of reggae music going forth in a conscious and constructive manner and I support that one hundred percent,” Duane said.
One of the projects already completed is Joyful Noise, a roots reggae compilation CD which features Duane with the single, Hard Times. Also on the compilation is Pressure with the single Modern Pharoah.
According to the producers, Joyful Noise features an impressive roster of artistes who are all at the forefront of the conscious reggae movement from their respective lands — which may be considered the nerve centres of original conscious roots music in this time.
I Grade Records was founded in St Croix in the US Virgin Islands during early 2001 by Laurent ‘Tippy I’ Alfred along with partner Kenyatta Itola. The label’s primary mission is to produce and release the highest quality reggae music emanating from St Croix and the US Virgin Islands. Over the course of several highly acclaimed releases, I Grade has developed a unique musical identity that is undeniably roots, but freely influenced by hip hop, jazz, soul and other musical genres, forming a sound that is both ancient and modern.
Having released several powerful debut albums, I Grade Records is known for its keen ear for new voices that need to be heard. As a crucial part of the roots music movement in the VI, I Grade is committed to “spreading musical isles and healing, from St Croix to across the world”.
Posted by Dancehallreggaeweseh.com at 12:25 PM