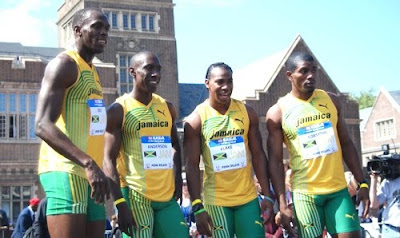 By Anthony Foster in Philadelphia

The Jamaicans not only destroyed the field to win, but they broke USA’s meet record of 37.92 by running 37.90secs.
Yohan Blake, Marvin Anderson and Mario Forsythe were the other team members.
Shawn Crawford, the 2004 Olympic 200m champion, could not hold back his thoughts during the post race press conference.
“I hate losing, and I hate losing to Jamaica.”

He blamed the team’s defeat on the handoff, even though Jamaica was far from full-strength … as Asafa Powell did not run while Nesta Carter ran on the other team.
“I’m tired of being plagued by messed-up handoffs. We’re better than that, but it seems like the last four years, we’re not better than that.”
Michael Rodgers was also upset, but mainly because Jamaica broke their Penn Relays record in their backyard.
“This is the first time I’ve lost to Jamaica, and they broke our (Penn Relays) record. And they did it on home soil. How would you like it if somebody came in your house and beat you?”
Source: www.trackalerts.com
Posted by Dancehallreggaeweseh.com at 10:15 PM

Email ThisBlogThis!Share to TwitterShare to FacebookShare to Pinterest
Labels: SPORTS