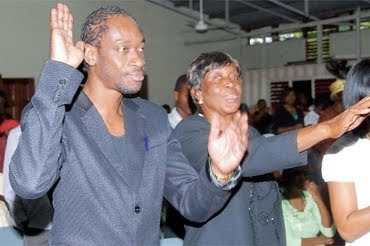 Sometimes fact may sound stranger than fiction. And the call from a source to say that Bounty Killer would be going to church on Sunday (yesterday) was just a little hard to believe.
Somehow, 'Bounty Killer' and 'church' were two words that just didn't sound as if they should be in the same sentence ... and so very close together. Anyway, the story was that Miss Ivy -- Bounty's beloved mother and an upright Christian lady -- had ordered her son Rodney, to be present at her church yesterday morning. And, as the source pointed out, "If Miss Ivy say him fi come a church, him haffi come."
Needless to say, Bounty, and his entourage, was present and on time at Miss Ivy's place of worship, the Agape Christian Fellowship Church in Gregory Park, St Catherine.
Dressed in his trademark 'full black' and looking none the worse for his 10-day stint in police lock-up, from which he was released only on Friday, Bounty was obviously there to give thanks that he had come through his recent ordeal unscathed. No doubt, the prayers of Miss Ivy and the prayer warriors at her church played an active role in Rodney's eventual release from jail and the church welcomed Killer as if the Prodigal Son had returned.
Clearly, Bounty was not in church under duress, as the radiant smile on his face as he fellowshipped on an overcast Sunday morning, was enough to light up the entire community of Gregory Park in Portmore. Church leader, Pastor Maxwell -- father of Spelling Bee Champion Jodie-Ann Maxwell -- had a special consecration for Miss Ivy last son, who, like a good altar boy, was armed with his sword -- the Holy Bible. Evangelist Yvette Blake also had prayerful words of advice for Rodney.
Interestingly, one close Bounty aide had commented at the time of his arrest, that the Killer needed the jail time to get away from all the 'waste people' in his life, and to reflect. "Bounty need to stop go out every night and waste so much money pon liquor and flossin', so me glad him nuh get nuh bail, mek him stay deh and hol' a medz," the Alliance member noted.
One cannot help but wonder if his attendance at church yesterday comes as a result of the reflection, and marks a new beginning for Rodney Basil Price.
Source: www.jamaicaobserver.com
Posted by Dancehallreggaeweseh.com at 1:17 PM