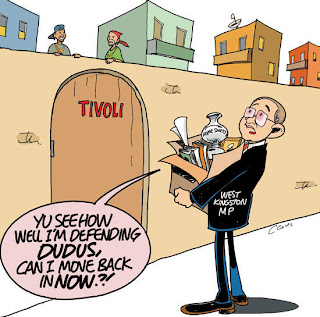 As official reports surface of accused drug lord Christopher Coke's escape from his barricaded Kingston, Jamaica neighborhood, where Jamaican authorities have been attempting to arrest him for extradition to the U.S., ABC News has learned that a U.S. government report refers to Jamaican Prime Minister Bruce Golding as a "criminal affiliate" of Coke.

Golding, who led resistance to Coke's extradition before public opinion forced him to reverse himself, is described in a document read to ABC News as a "known criminal affiliate" of Christopher "Dudus" Coke. According to official U.S. accounts, Golding's Jamaican Labour Party (JLP) was voted into power through "Coke's murderous and strong-arm tactics."
Recently, Golding and other senior Jamaican officials have been electronically intercepted talking to Coke inside his fortified redoubt, US authorities say.
The major police action to capture Coke began Monday morning. On Tuesday, U.S. authorities said they believed Coke had escaped through a ring of hundreds of cops and soldiers who had surrounded the West Kingston neighborhood of Tivoli Gardens. Jamaican and US authorities report that Coke may have slipped through police lines and escaped into one of two adjoining areas, either Denham Town or Jones Town.
source: abcnews.go.com
Posted by Dancehallreggaeweseh.com at 3:53 PM