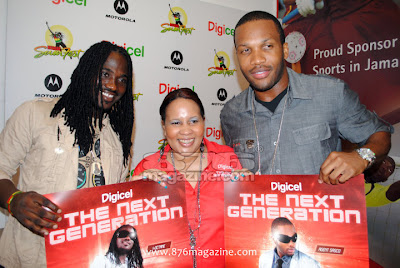 Digicel, sponsor of Sumfest for the 10th consecutive year, recently announced the two faces that will lead the company’s Sumfest Marketing Campaign — Agent Sasco and I-Octane. The announcement was made during the official launch of the Reggae Sumfest 2010, came a week after the telecommunications company reported that they have teamed up with international producer Demarco to produce the vibrant and energetic rhythm titled “Next Generation”.
Agent Sasco, after rebranding himself from his former name — Assassin, is said to be leading a revolution in the Jamaican music industry. Commenting on his involvement with Digicel’s Sumfest marketing campaign Sasco expressed, “something like this is a testament to my character as an artiste and something that I am very proud of.”
I-Octane, a fresh face that also has one of his recent singles (She Deh Yah Fi Mi Love) featured on the Digicel Sumfest rhythm, also echoed similar sentiments stating that, “being one of the faces of Digicel’s marketing campaign for Sumfest definitely adds a new dimension to my career and it’s truly an honour to be a part of the Digicel family in such a big way”.
Digicel’s marketing campaign for Sumfest is gearing up to be the hottest marketing campaign for the summer with the telecoms provider promising customers great value offers. According to Shelly-Ann Curran, Senior Sponsorship Manager at Digicel, “Our line-up of activities this year has led us to forge some fantastic partnerships that will ensure that our customers continue to benefit from superior value and amazing offers. We have also joined with Motorola again to continue wowing our customers with the latest innovation in mobile technology and we will be announcing these details very soon. It’s going to be a great summer for Digicel and our customers and we’re looking forward to it”.
Posted by Dancehallreggaeweseh.com at 2:36 PM