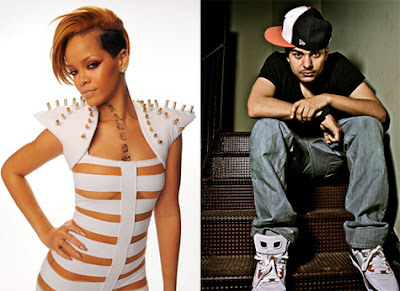 Creating a record to top the success of Rihanna’s “Rude Boy” is a challenge Alex Da Kid is willing to take on. The 26-year-old producer has been crafting beats for the Bajan singer’s’ forthcoming album.

Rihanna may be in the early stages of recording her fifth opus, but she’s already calling on Alex to craft records to her liking. In the past, the London native made beats specifically thinking about the pop star’s tastes. “When I first started working with [Rihanna], I was doing that,” reveals Alex, who produced “Love the Way You Lie,” her collaboration with Eminem.

As time progressed, the “Airplanes” producer took a more organic approach. “I don’t try to directly mold [a record] to her ’cause you never really know what she’s thinking,” he tells Rap-Up.com. “She wants input from other people. She doesn’t always want to come up with the ideas. She wants talented people to help come up with ideas. I just do what feels natural.”

Alex has teamed up with Rihanna on several records, none of which he can name nor describe yet. “We’ve done a couple,” he admits. “We’ve got a few good ones that will probably end up on the album.”


MELLOQUENCE DOES MUSIC VIDEO FOR TAKE YOU HOME SINGLE

A combination of the words ‘mellow’ and ‘eloquence’ has given rise to Melloquence, a singjay who says his name speaks for itself. A 2008 Top 10 finalist in the talent quest, Magnum Kings and Queens of Dancehall, Melloquence is currently signed to Big Already Entertainment, for whom he has been voicing singles while honing his performance skills. One of the singles commanding air time is Take You Home, and the artiste is quite excited at the possibilities. “This song is being embraced by the people and we have been encouraged to do the video,” he said. Directed by Janelle Dyer of Scorpio 21, the video had its television premiere last weekend and so far response has been quite positive. “When I saw the storyboard, it was something similar to what I had in mind for the song, and it’s really a nice video, even if I say so myself,” Melloquence said. “It is a club setting and it very much to the point. There’s nothing for anyone to have to guess and spell about,” he said. Other singles in rotation for the artiste are Royal Woman, produced by Dr Dizzle and Heart Cries Out, which features Classical Esca. “Right now things are looking up. I am comfortable in myself and have every confidence in my management team,” he stated. The Charliemount High School past student, whose real name is Ramone Drake, writes all his material himself and has worked on projects with other artistes including Tanya Stephens, Gentleman, I-Eye, Buju Banton and Sizzla.
Posted by Dancehallreggaeweseh.com at 10:57 AM