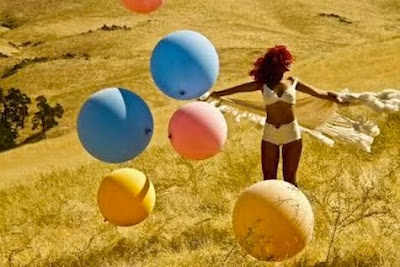 Rihanna has a ball on set of the music video for her new hit single “Only Girl (In the World).” After filming her theatrical debut Battleship in Hawaii, the Bajan songstress tweeted a pic from the set, spinning a shawl around herself while giant balloons fall from the sky onto the surrounding field.
“What up #RihannaNavy I’ve been busy being the ‘Only Girl In the World’ wanna see more?!?!” tweeted the red-haired singer.
“Only Girl,” which currently sits at No. 3 on the Billboard Hot 100, is the lead single off her fifth album Loud, dropping November 16.

UPDATE: Click below to watch some fan-filmed footage of RiRi dancing in the streets of New York City while shooting another video, reportedly for the song “What’s My Name.”