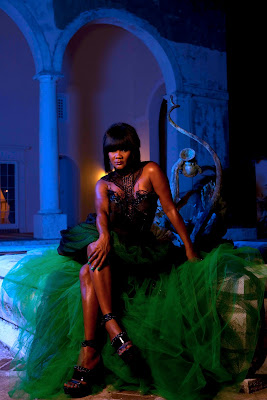 Having declared in her current single, Party Till December, that her “body’s too hot to be at home just sitting back”, Lady Saw, not surprisingly has been living it up in fine style. The dancehall diva, whose album My Way, had its official release on Tuesday, secured an invitation from BET’s 106 & Park to appear as a guest judge on the popular Freestyle Fridays and Lady Saw graciously accepted the invite.
“It was an honour and the spin offs from that I am sure will be tremendous,” Lady Saw said with enthusiasm. “This is good for me, as the publicity will surely help my album and it’s a positive move for dancehall as a whole,” she added.

Freestyle Friday is a segment on BET's popular show 106 & Park where two aspiring rappers compete in a freestyle battle before the studio audience and the cypher (from 2006) and three celebrity judges (the DJ sometimes acts as the 3rd judge). Each competitor alternates freestyling for 30 seconds in each of the two rounds. The rappers are not allowed to use profanities or sexually suggestive lyrics, punishable by disqualification. After the battle, the judges decide the winner, per majority vote.
The rapper who wins each week wins a prize and returns the following Friday to defend their Champion title. After seven consecutive wins, however, the rapper is retired and inducted into the Freestyle Friday Hall of Fame.

The episode, which will air on Friday September 10, 2010 at 5:00 pm local time has Lady Saw as guest judge alongside rapper Waka Flocka Flame, the American rapper signed to 1017 Brick Squad and Warner Bros.

Lady Saw, the acknowledged ‘Muma’ of the dancehall, is highly respected internationally for her deejaying skills and her ability to ride a riddim. Her recently released album, My Way, has productions from Tony 'CD' Kelly, Lloyd 'John John' James, Danny Browne and Stephen McGregor. Among the tracks are Every Way Mi Go, Your Chick, He Is At My House (Feat. Eve), My Way, Me Hold Yuh, Muscle Control (Feat. Camar) and I Can’t Wait (Feat. Ding Dong).
Posted by Dancehallreggaeweseh.com at 1:35 PM