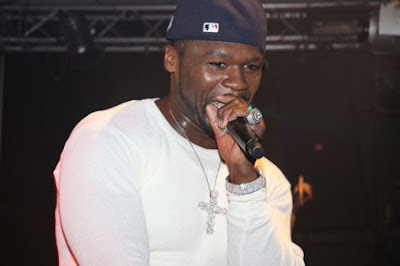 50 Cent is betting big on the New York Giants. Backstage at the Bud Light Hotel in Indianapolis during Super Bowlweekend, the hip-hop tycoon spoke to Yahoo! about the million-dollar wager on his home town.
“Baby had said he had $5 million on the Patriots,” 50 said in response to the Cash Money CEO’s proposed bet on New England. “I just think he was just passionate about the Patriots winning and just said that. I don’t think he actually would bet $5 million.”
The G-Unit captain banked $500,000 when the Giants defeated the 49ers in the playoffs. “It would just be risking what I won the first time,” he explained.
But one bet he won’t be taking is posing nude on Twitter if the Giants lose, which one fan suggested. “No. This is what happens on my Twitter,” he said. “When people say really crazy things, I say, ‘OK.’ I don’t say anything else. I just say, ‘OK’ so my fans can see the crazy things people say to me because they don’t pay attention to what they’re saying. They only pay attention to my response.”