Droop Lion is no monk; singer keeps it real on tour with The Gladiators 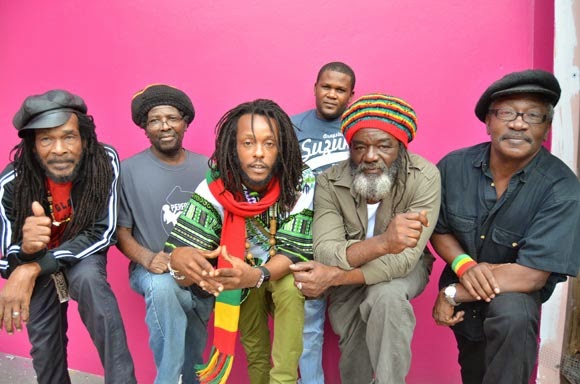 February, and the subsequent dizzying round of festivals in the summer, Droop Lion and The Gladiators are back on Jamaican soil, recuperating, reflecting and ready for intense studio work. Whereas, The Gladiators are seasoned hands at the touring game and know exactly how to circumvent the many potential pitfalls, Droop Lion is learning, and learning quickly too.

Droop Lion, who has been relatively newly-baptised as lead singer  of the legendary reggae group, makes no claims to being a monk, or any such holy figure, however, when on tour, his circumspect behaviour has led to such questionings. But, being the soul that he is, Droop takes this all in his stride and maintains his Rastafari livity. An ardent musical ambassador, whose choice of on-stage rainment – a gown – makes him somewhat of an ethereal figure, Droop makes no apologies for his conscious decision to let his music do all the talking.

“I learnt a long time ago that you can’t mix business with pleasure,” the humble, yet outspoken, reggae singer  said. “Especially  when the business that you are in involves excess amount of hype. I enjoy being on stage and I also enjoy  interacting with fans, taking pictures and signing autographs, because that is another important aspect of the business. But we all know how the world set up, as long as there are so called ‘celebrities’, there will always be those persons who want to get intimate,” he noted.

But Droop Lion has been so resistant of crossing that invisible line, that one female fan in Europe was forced to ask him quite seriously, “Tell me something, are you a monk?” Laughing as he recalled the situation, Droop Lion admitted that the question took him by surprise, mainly because it was asked with such deep concern. He did his best to reassure her, with words only, that he was no monk, but whether or not she believed is quite another matter.

Droop Lion, who is managed by Free People Entertainment, has maximum respect for manager  Cabel “Jeffrey” Stephenson. “Jeffrey is one of those persons who manages his artistes, the artistes cannot manage him. On the road, his experience is second to none. When I perform on stage for two hours three and four times per week, he knows the regimen for the voice to ensure that it sounds clear for the entire tour – the voice exercise, the special mixtures to keep it pure, and of course, nothing beats good rest. When on tour, we are so focused on getting to the next venue, putting things in place and pleasing fans, that we don’t have time to mess around … or even feel the need to,” the singer explained.

Posted by Dancehallreggaeweseh.com at 1:13 PM