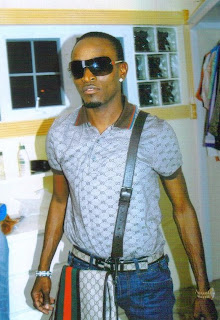 If there were an award for taking flossing to an entirely new level, then King of Flossing, Flippa Mafia, would win hands down.
Full of style, with lyrics to match, an easy smile and a passion for pleasing his fans, Flippa says he has paid his dues and is now reaping the rewards. Like him or hate him, the fact is that, starting at the end of last year (remember Stone Love anniversary and Sting?), Flippa injected new and exciting vibes in the dancehall with his flossing antics and lyrics.
In December 2008, he swaggered onto the stage at Stone Love anniversary at Mas Camp, threw coils of $1000 and $500 bills into the crowd and, incredibly, a dancehall star was born. Some persons perhaps wouldn’t even be able to remember the songs Flippa did, but by the following day, the street was buzzing with his name. And closely following on that was the need to know the tune, Dem Yah and Dem Yah. He repeated his act on Sting on Boxing Day — this time adding US dollars and pounds to the loot — and again his ratings shot up.
While some have been charmed with the flossing lifestyle portrayed by the Mafia, who sings that he has “money more than how the bees have honey”, others contend that throwing out money to the crowd was a cheap gimmick, a waste and speculated whether or not Flippa even owned anything of value.
Flippa quickly hit back with Unfinished House, a song whch puts things in perpective: Mi vehicle cyaan bigger than mi house/And mi rims cyaan dearer than mi couch, some bwoy a hype over unfinished house/And mi madda nuh waan lef Waterhouse
“I don’t have a house … I own houses,” the jovial Flippa declares seriously. “I believe in the saying that you have one life so live it to the fullest. But even though you may see me flossing, remember that the important matters like school fees for kids and the mortgage are paid and all bills get placed on the front burner,” he emphasised.
Flippa has been steadily building his repertoire and enjoying enviable success in the streets, on the charts and on various stages. As is the nature of the business, he has even been in a lyrical battle or two — first a skirmish with Alliance general, Bounty Killer (over the song Unfinished House, as word on the streets is that Killer’s mansion in the hills is unfinished after quite some time) and then with Elephant Man.
“But it’s all musical on my part,” Flippa emphasises, explaining that with the Bounty argument, “everything is squashed … settled … finished.”
The battle with Elephant, however, rages on as songs by the two combatants have dominated the airwaves and still have the dancehall chatting.
Flippa doesn’t mind all the chatter. “Believe me, it only makes me stronger,” he says. “I am not about being a ghetto superstar, I am putting my thing on an international level,” Flippa adds.
He says that was the reason why he took the decision to stop throwing out money at shows and instead set up a foundation to help needy children.
“I love having fun and seeing people enjoy themselves. Giving away money at shows was just my way of adding to the entertainment value in a real way and making my performance a bit different. People use all kinds of things — some have a bag of dancers and hype men to help keep the thing on a level, others use different kinds of props … Flippa Mafia was known for popping champagne and throwing out money,” he said.
But it’s now on to the next level, and the artiste says he is more focused on his music and helping in a tangible way. “My foundation will be targetting kids because they are the future,” Flippa stated.
But whether or not he has totally retired from his money-throwing gimmick is left to be seen. However, the artiste is all smiles as he strides confidently towards his goal. Unfinished House has already captured number one on the chart this year and follow-up singles are doing extremely well. He has been on all the major shows for the summer, Sumfest, he was seen flossing at ATI/RTI Dream Weekend, A St Mary Mi Come From, Irie Jamboree in New York and his own Philly Fest. He says he has an album in the making and it should be ready by yearend.
To his fans, he says, “Don’t let negativity keep you down. I grew up surrounded by negativity but that didn’t prevent me from going after my goal. Just keep focused.”
Posted by Dancehallreggaeweseh.com at 10:44 AM