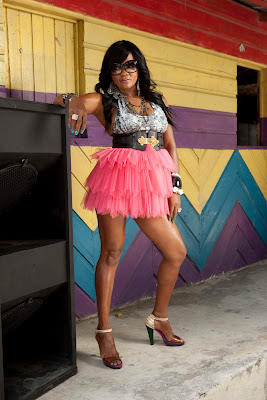 She’s the acclaimed Muma of the dancehall who has mastered the art of delivering edgy – and sometimes downright raw—lyrics with the right amount of irreverence laced with humour. But, within her also lies her repentant alter ego, Marion Hall, the singer who can thrill a crowd at the Jamaica and Blues Festival.
However, come Sunday December 26 at Jamworld in Portmore, Marion Hall will be tucked away in bed, as the diva of the dancehall, Lady Saw mounts the Sting stage to deliver a rare performance. It’s been seven years since Saw last thrilled fans at the Boxing Day event with her hardcore lyrics, delivered in her raunchy and lovable style, and she is looking forward to a triumphant return.
The deejay, who earlier this year released her eights studio album, My Way, says her "return” to the Sting stage will be nothing short of spectacular. One of two females in the blistering ’13 Warriors’ segment, Lady Saw is approaching the upcoming event as a serious challenge.
“We know that Mr. Laing says there will be no war at Sting, but who really believe him? This is Sting and tings haffi gwaan. As far as I can see, there will be a lot of issues to be settled with some artistes,” Lady Saw expressed.
And, while Lady Saw has no intention of getting into any kind of “kas kas” with any artiste at Sting, she is busy sharpening her pencils, as she knows that Sting is not for the faint of heart.
“I’m here studying for Sting,” she said in a telephone interview from her St Mary home. “Yeah man. This is Sting and as an artiste you have to be prepared. You can’t go with any and any ting. I’ve written some songs especially for the Sting crowd, so I’m here at home going through them, getting the delivery and those things right,” Saw explained.
She notes that she has already rehearsed with Ruff Kut and “things are shaping up good. I’m pretty excited about this upcoming Sting performance,” she said.
Meanwhile, Lady Saw is also reveling in the recent release of the official Lady Saw app, which fans are being urged to download and get connected to the Queen of Dancehall. She explained that this new app is one way to get the latest Lady Saw music, videos, pictures, show info and much more.
Saw also has several new ringtone’s available including, He’s At My House featuring EVE her newest single off of her My Way album.
“The app is very cool and takes Lady Saw right up there with cutting edge technology,” she sated.
As for Sting, she said with a lot of sass, “A we seh Party Till December … so we are gonna make this December show a party to remember.”
Posted by Dancehallreggaeweseh.com at 9:55 AM