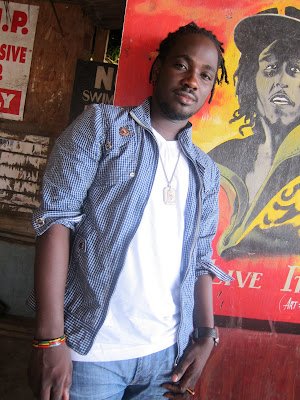 Recently named Best Cultural Artiste for 2010 at the respected Stone Love Awards, singer Byiome Muir, aka I-Octane, is full of gratitude for this honour, while vowing to continue the musical mission started by reggae’s greatest singers.
I-Octane easily admits that 2010 has been a turning point in his career and many are saying that it could aptly be described as ‘the year of I-Octane’. It has seen his songs having immense impact locally and internationally, even as his lyrics fall easily from the lips of fans of all ages and across all socio-economic backgrounds.
The year has also witnessed an undeniable rise in the I-Octane’s popularity, evidenced by the frenzied reactions of concert-goers to his performances and his increasing demands for live appearances. The decision by telecoms giant, Digicel, to sign I-Octane as one of the wholesome faces of their media campaign has also proved significant..
“In 2010 I have made strides in my career and it feels good. Of course, the fans have played an important role in all that has happened, because without fans it’s like your music isn’t reaching anywhere,” I-Octane declared.
With the traditional silly season in high gear, the artiste had already been off to a great start. I-Octane’s annual Christmas Treat and free stage-show in Portmore was a resounding success, he has been performed at the Digicel Tree Lighting Ceremony in the Sunshine Community, and also at the free Red Stripe Stand Out concert recently on Knutsford Blvd, New Kingston, all to much acclaim.
I-Octane is now eagerly looking forward to the upcoming shows for which he has been contracted. Among them are My Life Nuh Easy on Christmas Eve, Fip Jam Fest and GT TAYLOR Christmas Extravaganza, both on Christmas Day; and TeenSplash and Sting on Boxing Day.
He commented: “This is a great way to close what has been a truly wonderful year.”
Posted by Dancehallreggaeweseh.com at 9:52 AM