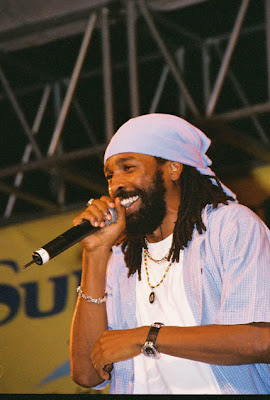 POPULAR dancehall Deejay Spragga Benz, was this afternoon listed as a person of interest by the Kingston East police. Investigators want to interview Spragga Benz, whose real name is Carlton Grant, in connection with the triple murder last night in the McIntyre Villa area of the Division.

About 11:40 pm, Escoffery and Richards were among several men at a shop watching TV when a group of men armed with high powered guns alighted from a motorcar and opened fire at them. Richards died on the spot. Escoffery and another man were taken to hospital where he was pronounced dead and the other man admitted in serious condition.

The third man has since died, police report.

Grant must report to the Police personnel at the Elletson Road Police Station by 2:00 pm tomorrow, police stated.

Persons with information on the whereabouts of Grant are asked to contact Operation Kingfish at 811, Crime Stop at 311 or Police Control Centre at 119.


Posted by Dancehallreggaeweseh.com at 5:34 PM